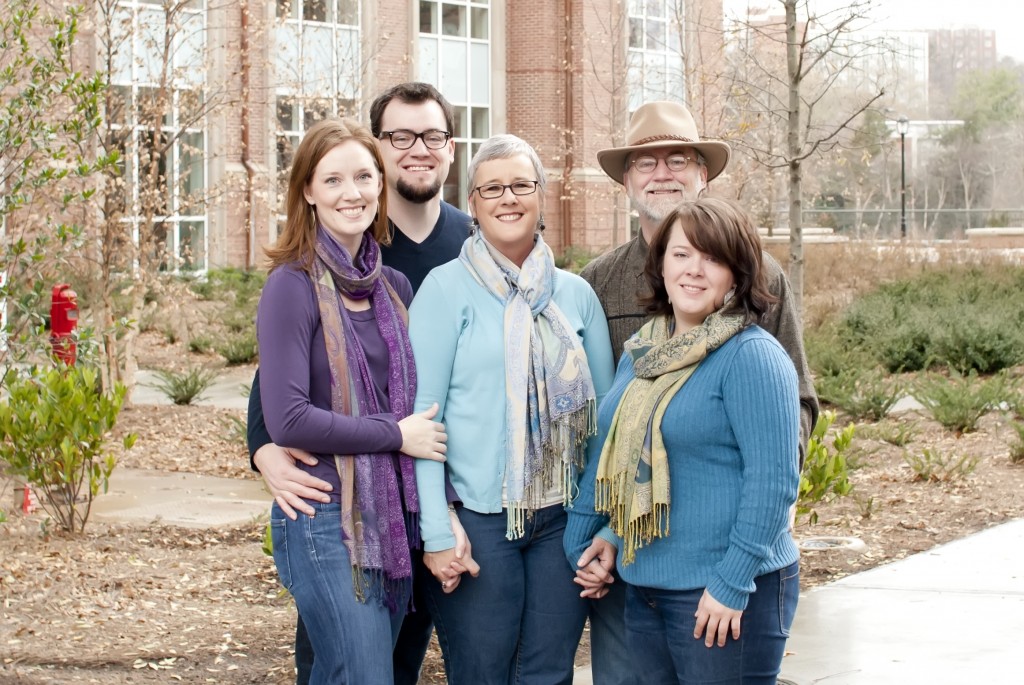 I come from a family familiar with breast cancer.  My grandmother battled breast cancer twice…once when my mom was nine years old at the age of 38 and again at the age of 45.   She beat it both times but was left with horrible scars from radical mastectomies.  She had a concave chest and wore huge prosthesis.  Breast reconstruction wasn’t an option for her in her day.  My maternal great aunt died when my mom was nineteen and pregnant with me,  from her battle that began as breast cancer.  My grandmother had three daughters…my aunt M, my aunt D and my mother.  My aunt M has blessedly made it through many decades with no signs of breast cancer.  My aunt D was diagnosed at 42 years of age and underwent a mastectomy and chemotherapy.  She developed symptoms similar to ALS as a result from the extreme chemo that eventually took her from this earth.

Here’s a little chronological history of my own story:

JUNE 2007– My mom had her annual mammogram, but this year was different. They found a lump in her left breast. The biopsy showed it was benign, but she decided that was the push she needed to make the decision to have her breasts removed. She began planning her surgery.

NOVEMBER 15, 2007– My mom had a bilateral mastectomy and reconstruction. She had planned for a DIEP reconstruction for both breasts.  Due to scar tissue from previous surgeries she ended up with a DIEP for one breast and a free TRAM for the other.  Five days later the pathology report showed cancer in her right breast. She had many complications with her surgery and required four more surgeries.  She was finally finished in 2009.

OCTOBER 2011– I participated in the Susan G Komen 3day for the cure.  I am so grateful for this weekend in Atlanta.  I feel like I went through a roller coaster of emotion.  I loved every minute of  freezing our tails off in the morning cold, sleeping between my snoring friends, driving in circles all over Atlanta and most of all exploring all the emotion inside of me that I try so often to ignore.   I do believe I was exactly where I needed to be with the group of people I needed to be with.
Breast cancer has affected my family in so many ways but it hasn’t been as personal as it has been for many of the people I came in contact with during this 3day.  In my mind it’s always felt “manageable” for some reason.   To be there at the event really put some reality to it that I had not experienced before.   I haven’t ever watched someone die from breast cancer.  I haven’t ever had a friend diagnosed.   My mom’s diagnosis didn’t even really seem “real” to me because it was after she had her breasts removed.

Saturday…was a big day.  Something really hit me.  I saw way too many buttons, signs, tshirts with people missing their mamas and I realized that could have been me.  I felt so humbled and grateful for the gift of research and genetic testing and most of all for the voice inside my mother’s heart that led her to have her surgery before anything grew out of control in her body.  Then my thoughts quickly went to my children and what I must do in order to ensure they aren’t wearing buttons with my picture.   It was like my heart was being stepped on.  I felt so heavy.   I feel so sad that my mom knows I carry the gene.  I don’t know how in the world I will feel when I find out someday if I have passed it along to my own children.  How will I feel as they make decisions to deal with that diagnosis?  What if they don’t choose what I think they should choose?  What if they are afraid?

The rest of Saturday  was me coming back to peace with what had been opened up in my heart.  I had a moment of clarity on our walk back to camp when the sun was shining bright over the empty parking lot and I realized that my path is clear.  I will do the hard things that I have to do to stay healthy.  I will hold that moment in my heart for a very long time.  It was a content feeling…just peace at being where I was.

NOVEMBER 2011– I started doing my research about my own mastectomy and reconstruction options.  I printed off a list of all the plastic surgeons that are covered by my insurance.   Six pages of names and addresses but I wasn’t really sure where to start.  A friend emailed me and really took the time to reach out.  Her husband is a ob/gyn here in town and her sister in law is a breast surgeon in Atlanta.  She emailed her sister in law for me and got me several recommendations for surgeons.  I now have a list of four…two men and two women. I had my first meeting with a breast surgeon in Atlanta.  I had a mammogram as well as an ultrasound of my breasts.
I had a 1 mm spot on my ultrasound that Dr. Stallings felt was worthy of investigation.  I went in to have her do a needle biopsy and aspirate the fluid and they sent it off to pathology to see if it was cancerous or not.  Thankfully it was not cancerous.  I knew from that one experience of waiting for biopsy results that I couldn’t do this every year.  As a “high risk” woman I would be poked at every little suspicious lump and then subsequently made to wait for my fate.  The thought of doing that for the next 50 years was just miserable.

After more research I decided I wanted to try to have a natural breast reconstruction…breasts made from my own tissue and not implants.  I made an appointment with a surgeon in Charleston, SC.  I drove from Athens, GA to Charleston, SC with my husband so that we could visit the city and see if these were the right doctors for me.  Some friends of mine who used to live in Charleston recommended a wonderful place to stay and we spent a whole day enjoying the city.  The next day we drove to the Charleston Breast Center and first met with Dr. Craigie, the plastic surgeon, and his PA (whom I had already had over an hour conversation with over the phone…she was amazing and answered all my questions in depth).  I already felt so comfortable since I had been in contact with them over the phone.  In fact when I had emailed I had gotten a reply from Dr. Craigie himself.  They were so amazing.  My husband had so many questions and Dr. Craigie fielded them all.  They gave us so much attention and put me at ease.  It really felt like the right choice.  Then I was able to meet with Dr. Baron, the breast surgeon and his PA.  Dr. Baron was very attentive to my questions and then at the end of our meeting he leaned over and gave me a hug and said “You’re going to be ok.  We’re going to take good care of you.”  It was right then that my heart decided.  These were the right men for the job.  Not only are they amazing surgeons but they were compassionate and caring.  I felt as though I had two fathers who were going to care for me like a daughter.  We scheduled my surgery for February 1, 2012.  I would not see them again until the day before surgery.

JANUARY 2012–  This was my month of planning.  Because of the type of reconstruction  I planned to have I would need to stay in Charleston for two weeks after my surgery.  I have three children and a busy husband.  This meant I really had to plan out what those two weeks would look like.  My friends helped me come up with a meal plan and I planned out the schedule…found people to take my children to and from school…to and from activities…stay with them in the afternoons until my husband got home from work.  So many details.  It’s a good thing I’m a professional organizer.

FEBRUARY 1, 2012– I had a bilateral mastectomy (removal of all mammary tissue by a breast surgeon) and GAP flap reconstruction (reconstruction of both breasts with fat tissue from my upper gluteal area.  The skin, fat and tiny blood vessels are removed through an incision that can be hidden under the panty line and the tissue is used to create breast mounds.) We attempted a nipple sparing surgery but only my right nipple survived.

MAY 22, 2012– I had stage 2 of my reconstruction.  My surgeon revised my breast scars and began to recreate the left nipple.

NOVEMBER 27, 2012– I had stage 3 of my reconstruction.  I finished my breast revisions and also revised my donor site scars.  We did contouring through liposuction to make the donor site more smooth and make it less noticable that I had tissue removed.

NOVEMBER 26, 2013– I had another revision surgery.  I had lipo to harvest fat to try to help eliminate some lack of fullness I had in my right breast.  We also harvested part of the right nipple to share with the left breast to help make that look like a normal nipple again.

SEPTEMBER 17, 2014- I had my bilateral salpingectomy (removal of my fallopian tubes).  I chose to keep my ovaries for now.  It was a simple laparoscopic outpatient procedure and my surgeon was able to take a great look at my ovaries and make sure they looked good.

Sorry, the comment form is closed at this time.